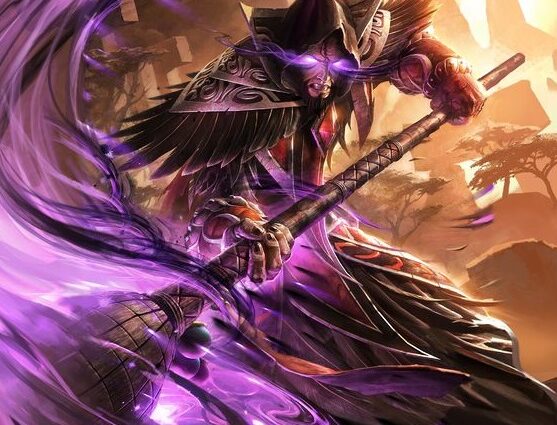 Medivh is the last guardian of Tirisfal. His mother was Aegwynn, who was a great and powerful mage. He also brought the orcs into the world, opened a path for the demons. His name means Keeper of secrets in Thalassian.

The guardians of tirisfal are an ancient line of protectors to battle with the Burning Legion. Sargeras possessed Medivh even before he was born. Medivh contacted the Orc Warlock, Gul’dan, and opened the dark portal bringing the Horde to Azeroth. His best friend led a party that eventually killed Medivh for his sins.

Aegwynn resurrected her son and Medivh returned as a prophet before the beginning of the Third War. He manipulated events to arrange the formation of an alliance between the mortal races of Kalimdor. This would guide them to victory at the Battle of Mount Hyjal.

Atiesh, Greatstaff of the Guardian

Medivh wielded Atiesh, Greatsfaff of the Guardian. His mother passed the staff down to him, his apprentice Khadgar now wields the same staff. Medivh was the main antagonist in Warcraft: Orcs and Humans, and returns in Warcraft 3: reign of Chaos and World of Warcraft. In the latter two, he is a redeemed supporting character.

Aegywnn, his mother, served as the Guardian of Tirisfal before him. She defeated Sargeras or it would appear so. He used the opportunity to transfer his essence into her body and he would lay. He twisted her thoughts slowly and she would become more distant from the Council of Tirisfal as a result. She met and fell in love with Aran, with who she would create an heir. This heir was Medivh, she locked her powers and knowledge in him and watched him from afar

Medivh had a happy childhood with his father. He was close to the kingdom’s royal court and had made friends with Prince Llane Wrynn and Anduin Lothar. One day Medivh and his friends were ambushed by jungle trolls in Stranglethorn Vale. Though no one was hurt badly, Medivh fainted after casting several spells. He ended up in a coma the evening before he turned 14.

During his coma, he awakes in the middle of the night from evil dreams. He was sweating and stumbled into his father’s room who touched his brow. The power his mother gave him awoke. One hundred clerics had to combine their talents with their fathers so they could contain the powers. By the time they finished, Aran was dead and Medivh was nearly dead.

Medivh spent almost 10 years in the coma caused by stress and Sargeras, but Anduin Lothar and the clerics at Northshire Abbey tended to him. After he finally woke up, he was under control but assured the clerics and the court that he was fine. Was he really? What do you think? If he was possessed, should he take the blame for what he’s done? Let us know in the comments we’ve love to hear from you.